Last year, we added a third track for IMS for z/OS users. This track was full this year! The traditional 2 Db2 tracks (Database Administrators and Database Developers) were also well attended. Some 60 Db2 and/or IMS users, mainly from Czech Republic and Slovakia, joined the conference this year. The event was sponsored by Broadcom, and held in the Broadcom R&Ds lab in Prague. Thanks to all the speakers who made the trip to share their expertise and give presentations about Db2 for z/OS and IMS.

A few pictures from the event!

Best presenter of each Track:

Wanna see more pics of the event?
Additional pictures of the event can be found at https://twitter.com/search?q=csDUG

Where are the presentations?

Your feedback is welcome

If you attended the Conference, feel free to leave additional comments below, for example, to praise one of the presenters!

Zowe: Making the Mainframe easy to work with, just like any other platform

The IBM System Z server (Mainframe) is the system of record for most Fortune 1000 companies, housing critical business data as well as PII data from customers that must be available at all times but cannot be compromised. The Mainframe platform is behind just about every critical user experience in business today. For this reason, every company shares common concerns about the security of their customer data and the compatibility and performance of the applications that drive their business.

What is Zowe?
Zowe is an open source project for the Mainframe. Alike Mac OS or Windows, Zowe comes with a set of APIs and OS capabilities that application developers can leverage. Zowe also includes some application samples and applications out of the box.
To learn more about Zowe, check out this 5 minutes YouTube Video: 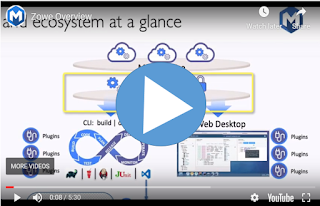 And Zowe is evolving at a fast pace! Check out the online Release Notes: https://docs.zowe.org/stable/getting-started/summaryofchanges.html. Since its initial release in February 2019, there has been new updates every month.

Zowe Application Framework: A web user interface (UI) that provides a virtual desktop containing a number of apps allowing access to z/OS function. Base Zowe includes apps for traditional access such as a 3270 terminal and a VT Terminal, as well as an editor and explorers for working with JES, MVS Data Sets and Unix System Services.
API Mediation Layer: Provides a gateway that acts as a reverse proxy for z/OS services, together with a catalog of REST APIs and a dynamic discovery capability. Base Zowe provides core services for working with MVS Data Sets, JES, as well as working with z/OSMF REST APIs. The API Mediation Layer also provides a framework for Single Sign On (SSO).
Zowe CLI: Provides a command-line interface that lets you interact with the mainframe remotely and use common tools such as Integrated Development Environments (IDEs), shell commands, bash scripts, and build tools for mainframe development. It provides a set of utilities and services for application developers that want to become efficient in supporting and building z/OS applications quickly. The CLI provides a core set of commands for working with data sets, USS, JES, as well as issuing TSO and console commands.

Where to start?
The installation of Zowe™ consists of two independent processes: